Don Ventura, an Optimus patient and a left, above knee amputee, nearly lost his life to infection in August of 2017. Being seriously ill, Don was rushed into emergency surgery. His doctors and family had to face the reality that he might not make it through the surgery. Don has limited memory of the events leading up to his surgery, but looking back he says that he was fortunate to only lose a leg and that his amputation has given him a second chance at life.

In the beginning, Don said it was hard to envision ever walking again. However, since the amputation, Don has not been willing to give up on the many things that he loves in life. Only two years before his amputation, Don had walked away from 17 years in commercial real estate to purchase a small auto repair shop and pursue his passion in the automotive world. He is also married, the father of two boys ages 10 and 25, and the proud owner of a Rottweiler. He says the journey to the point he is at now hasn’t been overnight and has seemed like a long, slow battle. He remembers, “In the beginning, it was nice to just be able to load my wheelchair into the truck using my prosthetic. What an accomplishment at the time that it made my life easier, but now I am able to walk without a cane and get into the truck just like the next guy, as long as I am wearing a good leg.”

Getting in and out of his truck has not been his only accomplishment. Don’s auto shop sits on a steep hill that he climbs daily. He also navigates around his home which sits on four different floors. That’s a lot of upward movement! He is also back to working on cars in his shop instead of just being a spectator, and he has pulled a 1969 Mach 1 Mustang out of storage and has started restoring it. “While it has not always been the easiest, I find that each week, I can accomplish something that was impossible just the week before.” Don did not start his journey with Optimus until a year into his amputation, but he says that he wishes he had partnered with Optimus sooner. He credits his Optimus clinician and his physical therapist as the ones who got him back to walking again.

Don had these words of advice to offer other amputees, “Don’t accept anything before you check it yourself. I had an issue with a piece of hardware that I only figured out because I asked to try something different. We are all different, and I am proof that some of us are not comfortable with the same item as the next person. I have tried several socket types before falling in love with the double wall socket.” He also encourages amputees to, “Find someone that has the same or similar amputation that is already successful in what they are doing. I have a couple of guys I knew before my surgery, and I know talking to them as well as seeing them getting around always lifted my spirits.” Perhaps most importantly, he wishes other people understood that “Being an amputee doesn’t define me. I get up each morning and go to work like the next
person. I just have a different routine for getting ready now.”

What a lesson to us all. Many of us, like Don, have been given a second chance in life. Are you focused on what was lost? Or do you embrace the second chance, realizing the passions, the dreams, the life, are still the same… you may just get ready for the day a little differently. 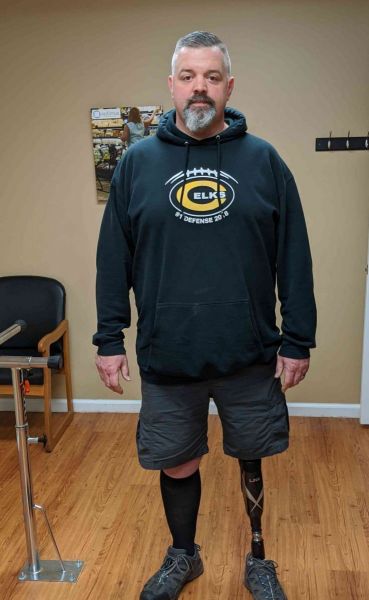